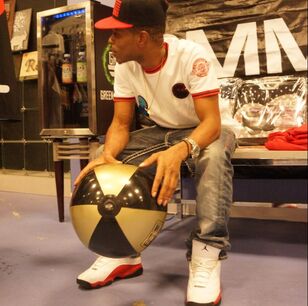 “I call my genre of music ‘reality rap,’ ” says hip-hop impresario and producer Kayo. “It describes the things that I went through. It’s reality because I used to write the songs to myself — to motivate myself, to overcome my worst situations. That’s why I say in songs like ‘True Story’: ‘I’m tired of walking, I wanna ride in a Caddy.’ I wrote that in 2005. Well, I drive a ’Lac now, so the self-motivation worked, didn’t it?” Kayo started spitting rhymes at the age of 14. “The name was given to me by my good friend Smokey, aka Smoke Mack (RIP)” he says. “The name later stuck with me after an altercation I had, where cats started calling me K Knockout, then Kayo. Once they figured out it was my stage name, it was over.” (From the San Diego Weekly Reader 2008)

In 2003, at 19 yrs old. Kayo started his record label, "On Fyre Entertainment" and produced and released over 15 artist on his indie label. In 2006, Kayo decided to pursue his Rap career and he released and successfully sold, marketed, and distributed his first mixtape, Konfessions of a Kriminal, followed by his EP, One Hundred Percent Hustle in 2008. “Money is a bigger motivation for me than sex. I could care less how pretty or good a female is. I got goals to accomplish. If she wants me, she’s gotta be helpin’ out.”

Lifestyle of a Hustler was finally released on June 19, 2012 on the On Fyre Entertainment/Go Reala Music Group label. With most of the beats by Kayo, other producers include San Diego’s own Dave Moss and Mass, as well as Houston's LT with Royal Thrown Productions, and Minnesota's DJ Blaze One, with LT producing the track “I’m Bout Money” also featuring I Rocc and Play B and DJ Blaze One producing "Get Doe".

In November of 2019, Kayo Hustle released his 6th Album, "Lifestyle of a Hustler Vol. 2". It's an amazing album that will definitely be known as a Kayo Hustle CLASSIC!

In 2015 Kayo officially changed his name by adding "Hustle" to his name which has been apart of his name unofficially since 2008 when Ma$$ and all his friends started calling him Kayo Hustle, or K Huss for short because of his obvious abilities "Hustling". He also secured  distribution from Empire Distribution for his label imprint, "Go Reala Music Group".

Kayo Hustle has many things planned for the music industry so stay tuned to see whats next!